Never change a running system- it’s time for the x-mas challenge, so come here to open 24 doors and unveil some great books that you know you want to read 🙂

So for today’s challenge I picked one of my all-time favorites, the good old „Rebecca“ by Daphne Du Maurier. A little while ago I found the Hitchcock DVD in a give-away-box and the movie is really good. It reminded me to go and hunt for the book on my shelves and yes there it was:

„Last Night I dream I went to Manderley again“ 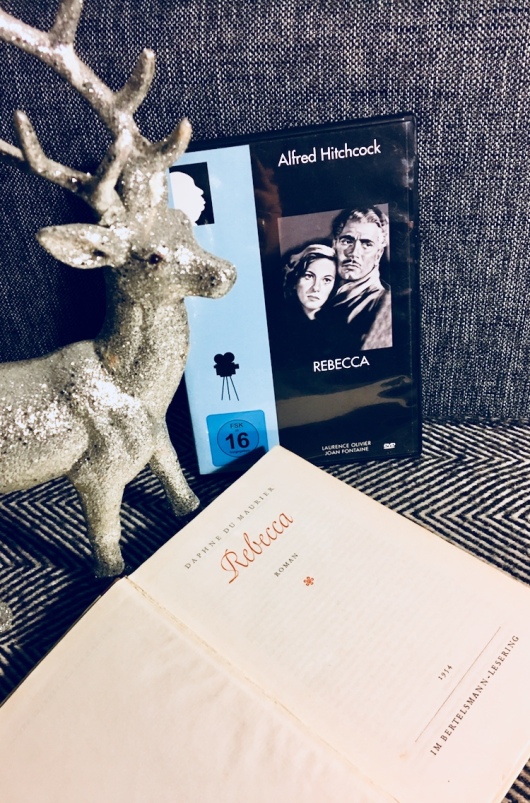 „Rebecca“ by Daphne du Maurier was published in 1938 and was immediately a huge sucess- much to du Mauriers surprise. It was so successful that Alfred Hitchcock turned it into – in my opinion – one of his best movies.

I love a good Gothic Novel and Rebecca is in that sense as good as they come. The book is about a naive young woman who works as a companion for a rich woman, who meets the rich good looking and significantly older Maxim de Winter in Monte Carlo. He is a bit distanced in the beginning but when the old lady wants to return to New York with her companion he asks the young girl to marry her.

The return to his mansion „Manderley“ in Cornwall after their honeymoon where the protagonist meets the housekeeper Mrs Danvers. We actually never learn the name of the protagonist she is only ever referred to as Mrs de Winter or „the second Mrs de Winter“. The Housekeeper is quite creepy and fosters a pretty unhealthy obsession with the deceased first Mrs de Winter, Rebecca, who died a year ago during a sailing trip.

Our naive second Mrs de Winter tries everything to settle in Manderley but she feels increasingly disquiet and Mrs Danvers hostility and constant comparision between herself and Rebecca, the first Mrs de Winter makes her uncomfortable and she is afraid of the Housekeeper.

The climax occurs during the annual costume ball. Mrs de Winter decides to surprise her husband with a special costume she plans on designing herself. Mrs Danvers sneakily suggests to copy the dress shown on one of the protraits in the galery, not disclosing that this was the dress Rebecca had worn at the last costume ball. When she joins the ball everybody is appalled and Maxim asks her to get changed. His sister explains to her that she is wearing an exact copy of Rebeccas dress.

When she tries to confront the housekeeper Mrs Danver tries to make her jump out of the window. Only the information about a ship in distress rescues her in that instance and when Mrs de Winter arrives at the beach she learns that Rebeccas boat has been retrieved with a corpse on board …

Daphne du Mauriers novel pays tribute to Jane Eyre or the works of Shirley Jackson. It’s full of atmosphere and a perfect example of my beloved „Gothic Novel“ genre.

du Maurier’s denial of her bisexuality unveiled a „homophobic“ fear of her true nature and she seems to have put a lot of these fears into the character of Mrs Danver. Nevertheless this is the perfect read for a chilly snowy weekend. Make sure you bundle up with a blanket a hot beverage or maybe even better a whisky to calm down your nerves.

So, what is your favorite/iconic first line?