Richard Feynman is a physicist who taught at Cornell and Princeton, worked on the Manhattan Project and won the Nobel Prize in physics in 1965.

Feynman was not a big fan of formalities and this dislike is a big theme throughout the book. His father was a sales man who dealt with a variety of people and he saw that underneath people were all the same. He passed these ideas on to his children and Feynman disliked formalities so much, ne nearly did not accept his Nobel prize.  I really liked the idea that the son of a sales man and a homemaker would win this prestigious price.

No question, Feynman was a brilliant physicist with a varity of interests and the stories told in this book are based on these interests mainly were the were linked with his work in physics. From his childhood interest in radios, his observations on human behavior, his laboratory at home, all the tricks and gimmicks he developed make fun stories to hear.

But unfortunately there is a big but. I am happy to oversee his huge ego because well he was indeed an exceptional clever person so ok but being brilliant and sometimes ahead of his time did not stop him from being a pretty sleezy womaniser and I am sadly missing my blessed ignorance about this side of him before I read the book.

Saw this picture somewhere and it is spot on. 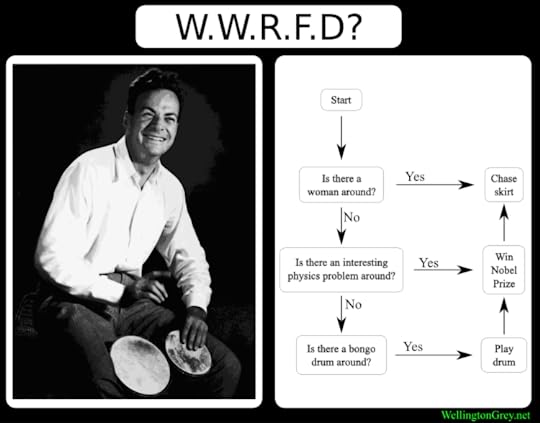 But beside that I enjoyed reading about his time at Los Alamos where he worked on the Manhattan Project and the stories about the time he spent in Brazil and Japan as well as the chapters on education.

Most of the stories he tells are about him having a hidden talent, using it often for some prank on others and then being applauded for it by others (or himself). He is not only a great physicist, mathematican, musician, safecracker, code breaker, drawer of naked girls etc. He is unfortunately showing off quite a bit and that can come across as him being a bit of a jerk.

I know I’m not doing a great job here advertising the book, but there were also parts I really liked and I really recommend this method he came up with and that is named in his honor:

He might not be the world’s most interesting and funny storyteller (as he believes to be) but there is still enough good stuff in the book for me to recommend it to you and follow up with one of his great lectures, for example this one on Gravitation:

Are you good at distinguing between the artist/scientist and the book?