After the audiobook „The Case of Charles Dexter Ward“ this was my first book I read by him and what a strange experience it is to encounter his nightmarish, eery universe. Lovecraft grouped his stories as follows: „There are my ‚Poe‘ pieces and my Dunsay pieces‘ and my Lovecraft pieces.“

I was astounded by this novella and quite impressed by his bizarre imaginative plot. He has such a gift for enhancing the sense of dread that hangs over the story, it was quite impossible for me to stop reading.

“It was as if these stark, nightmare spires marked the pylons of a frightful gateway into forbidden spheres of dream, and complex gulfs of remote time, space, and ultra-dimensionality. I could not help feeling that they were evil things—mountains of madness whose farther slopes looked out over some accursed ultimate abyss. That seething, half-luminous cloud background held ineffable suggestions of a vague, ethereal beyondness far more than terrestrially spatial, and gave appalling reminders of the utter remoteness, separateness, desolation, and aeon-long death of this untrodden and unfathomed austral world.”

So what is „At the Mountains of Madness“ (ATMOM) all about? A small group of a scientific expedition leaves into the mountain ranges of the Antarctic and there they discover the remains of a civilization that lived on earth million of years before mankind.

They eventually discover 14 specimens of a previously unknown species of life (having plant and animal qualities). Despite them being millions of years old 8 of the 14 specimens seem to be in nearly pristine condition. One of the group members provides the following description of these Elder Things:

Six feet end to end, three and five-tenths feet central diameter, tapering to one foot at each end. Like a barrel with five bulging ridges in place of staves. Lateral breakages, as of thinnish stalks, are at equator in middle of these ridges. In furrows between ridges are curious growths–combs or wings that fold up and spread out like fans which gives almost a seven-foot wing spread. Arrangement reminds one of certain monsters of primal myth, especially fabled Elder Things in the Necronomicon.

When Dyer (the narrator) and the remaining members of the party suddenly lose contact with the expedition, they fly to the out to investigate and what they find is… a living nightmare but I’m not going to say much more but be sure there investigations into what happened to the group leads you right into HP Lovecraft wonderful and terrifying nightmare. 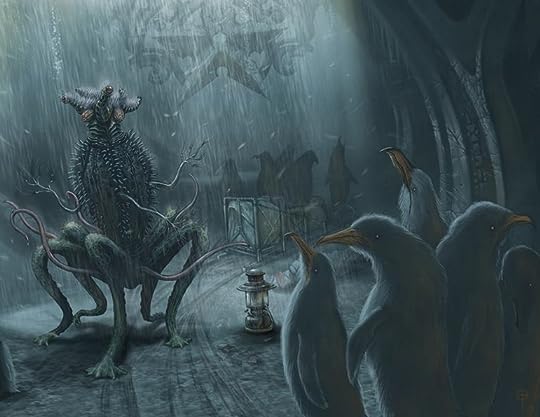 Lovecraft was most probably influenced by Edgar Allan Poe’s ending of the novel „The Narrative of Arthur Golden Pym from Nantucket“ and some real polar expeditions and managed to create his own uncanny eerie world.

This is definitely not my last story by H. P. Lovecraft and I’m sure there must be tons of movies that are based on his story so if you are looking for me, I might be down a deep and dark rabbit hole…

What have you read by H. P. Lovecraft? Any recommendations?

This site uses Akismet to reduce spam. Learn how your comment data is processed.